Since there was a tie in the Choose Your Own Adventure poll, an executive decision has been made to feature Warpaint next. 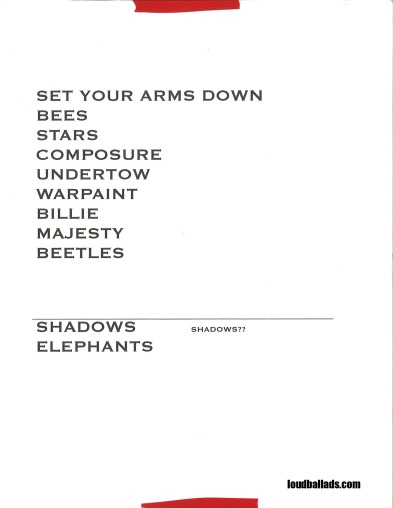 Late 2010, I hosted a holiday dinner party. My friend Jon arrived with a stack of CD-Rs for me, which included Warpaint’s 2009 EP, Exquisite Corpse and their 2010 album, The Fool.

When I got a chance to listen to the CDs, Set Your Arms Down (the first track on The Fool), immediately conjured up haunted memories of living in Greenville. All of the songs to follow had that same feel. And for once, it felt like there were others out there struggling with the same issues of being female, dealing with relationship limbo, having to quell primal feelings and still be taken seriously as an artist or musician without cheapening the sound and feel of the songs being created and produced. Aside from feeling a personal connection, this album was packed with solid riffs and harmonization and I had it on heavy rotation for weeks.

Fast-forward a few months to April 2011. Warpaint played a packed show at Kings Barcade in Raleigh and did not disappoint. Guitarists Emily Kokal and Theresa Wayman flanked both sides of the stage with ethereal presence, while Jenny Lee Lindberg (bass) and Stella Mozgawa (drums) kept all of the songs grounded from center stage. I was able to pick up this setlist after the show. There’s also a video below of Warpaint playing Majesty. The camera I used at the time was pretty heinous and I’m kind of cringing at the idea of sharing this with you, but I’m just an amateur and the audio is good (close your eyes or look at something else while you listen).